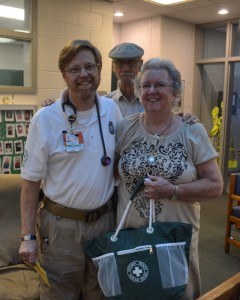 Back to News & Events

St. Patrick’s Day is a day the Marshall family will never forget.

“I went to the kitchen and put two dishes in the dishwasher,” she recalls. “And that’s the last thing I remember.”

When EMTs arrived, they spoke to Ritchie, who had found his mother lying unconscious and bleeding from her head on the kitchen floor. Doctors later explained she had experienced a “four blockage heart stop.” She also suffered a head injury and concussion during the fall.

“They worked great as a team,” Phyllis remembers after she gained consciousness. “It was a very coordinated, smooth effort. It has always amazed me there are enough volunteers to provide these services.”

Phyllis had seen her physician earlier in the week, who was concerned about her slow heart rate and was considering a pacemaker.

“I thought I was just feeling ‘old’,” Phyllis laughs, “or that maybe my meds needed adjusting. I had no idea it was this serious.” A few days after her emergency, Phyllis received a defibrillator and has been in great health ever since.

Following the incident, Phyllis reached out to the Virginia Beach Volunteer Rescue Squad with a note thanking the crewmembers who included VBVRS volunteers David Klinetop and Jessica Carroll, along with EMS Zone Paramedic Christopher West. “I have no doubt in my mind that the prompt, professional and caring service that I received from this group of dedicated people saved my life,” she wrote.

David, a Virginia Beach EMT since 2014, had the opportunity to meet Phyllis and Robert Marshall when they stopped by Station 14 in September to show their appreciation in person.

“All the while, I kept thinking – It’s St. Patrick’s Day, and these volunteers could be out celebrating with their friends,” said Phyllis. “But instead, they were helping me. They are the most gentle, considerate and compassionate group of people I’ve ever met. They’re my heroes.”