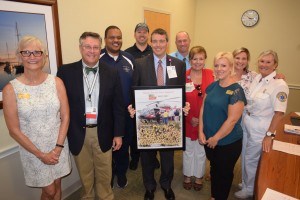 Back to News & Events

There is a daily association between the volunteer rescue squads of Virginia Beach and the hospitals in the city operated by Sentara Healthcare.

Ambulances run by the ten squads bring their sick or injured persons to Sentara Virginia Beach General and Sentara Princess Anne Hospitals and Sentara Leigh Hospital just across the city line in Norfolk, communicating their patients’ conditions as they whiz down city streets on the way to the ERs. So not surprisingly, when the volunteers reached out to Sentara to support the largest EMS appreciation event ever, Rock the Squads on May 7 at Mount Trashmore, the company stepped up with a significant donation.

“We really do see you guys as our partners,” says Robert Firestone, Vice President of Operations. “So many of our nurses and physicians begin their medical careers as EMTs in Virginia Beach. We are so fortunate to have the volunteer system. It really says a lot about our city.”

Firestone and other executives interrupted a Monday morning meeting at Beach General to accept a framed photograph from Rock the Squads. It depicts the yellow-shirt-clad
volunteers gathered on the hill at Mount Trashmore with an image of the Sentara Nightingale Regional Air Ambulance, which flew in for tours to the delight of the members and their families who came on that spring Sunday for a free lunch, challenge coins and a concert by The Deloreans.

“It was such a wonderful day,” said Dale Drescher, a volunteer at Station 14. “To be thanked in that way for the hours all of us put in was very meaningful, but so is the close working relationship we have with the emergency room personnel at all the hospitals.”

Two other volunteers, Mike McCracken from Station 4 and John Singleton from Station 5, also attended, along with Virginia Beach Rescue Squad Foundation Executive Director Kitty Schaum, who retires at the end of the year, her successor Gina Benefiel and Bobby Hill, Recruitment Coordinator for the Foundation. Among the Sentara team at the presentation were two former Paramedics, Dr. Timothy Pike, vice president of medical affairs, and Christopher Roberts, ER director, who called the volunteers “our heroes.”